The first day of the biggest bike trip of our lives and we didn’t get on and ride until near dusk.

Up at 2:30am, drive 200 minutes (and miles) down to the ending town, wait in traffic for an hour to park and another 90 minutes to load up. Hey, at least there were real bathrooms, our last for a week. I had plenty of company in there: 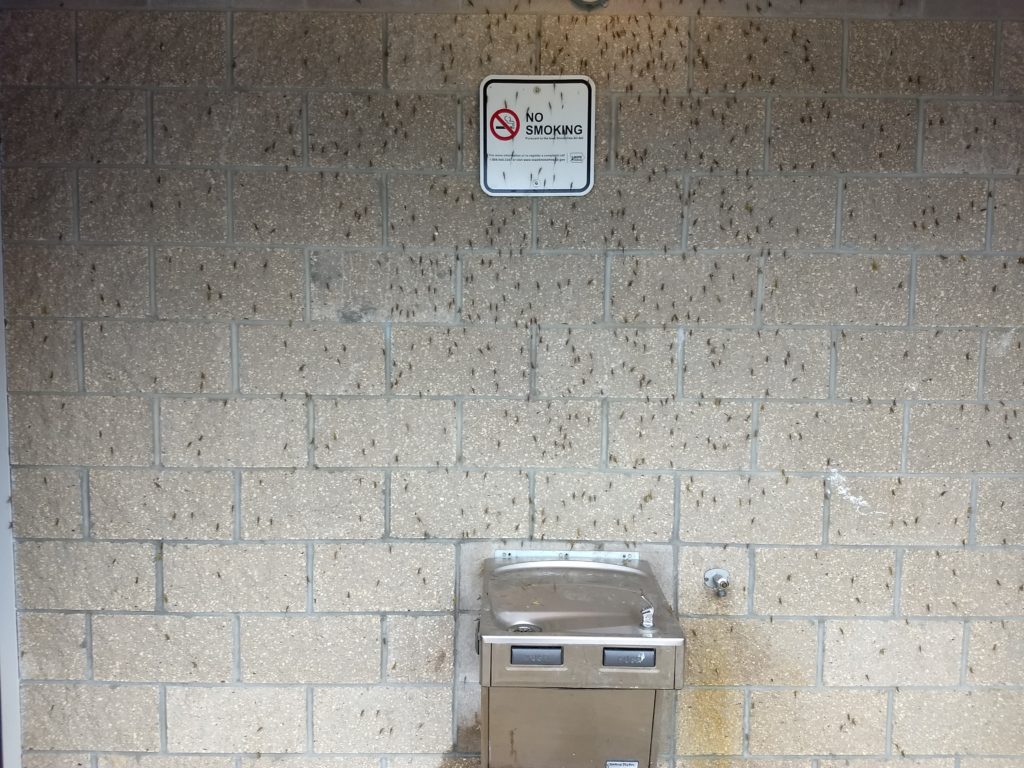 Crickets? Cicadas? Not sure. They had big wings, weird tails, remained completely motionless when I approached. (I tried to grab a close-up but there’s a guy just off-screen here staring slack-jawed and I didn’t want to push him.) Maybe we’ll reunite on Day 7.

Next up: a marathon schlep across Iowa to the starting town, in a coach bus with no A/C.

Actually, not quite across Iowa. The first step of our westward journey took us due east, into southwestern Wisconsin, across a six-mile stretch of lift bridge and causeway. Then north-northwest along the Mississippi’s eastern shore, to tidy little La Crosse, the Blufflands‘ de facto capital.

Apparently the fastest way across from Lansing to Orange City, Iowa, is Interstate 90, which tracks through Minnesota’s southern tier some 50 miles north of the crow’s flight.

The view’s about the same though.

Every Day Is Saturday

Five and a half hours feels like eleven when it’s a sweaty, close 85 degrees. Sleep came relatively quickly, but fitfully, and by the Rochester exit I’d roused for good.

I’d be lying if I said we made any new friends along the way. West of Rochester, after the landscape opened up, the intermittent wind farms kept my eyes glazed out the window. All that tethered me to the living world was the intermittent banter of the two fast friends behind me.

Without the international market, the man enthused, his current life of semi-leisure would not be possible. Last year, he sold seventy-five bikes to clients in Saudi Arabia. A smaller, indeterminate number headed south, to Mexico. The list went on, supported by a polyglot customer support center doing its part to bring the United Nations’ ethos to suburban Des Moines.

The first gentleman does not mix work and pleasure. “I love choppers,” he assures his companion. “But I’ve never ridden anything like those.”

He does enjoy gentler roadborne pursuits. “When you arrive in a new town, drive your RV to the far end of the Walmart parking lot,” he recommends. “Management is usually tolerant. They know you’ll spend enough there to make up for the trouble.”

“Look around the parking lot next time you’re at a rural Walmart. Maybe around back,” he adds. “You’ll see a few.”

The second gentleman lives in a high mountain valley in the central Colorado Rockies, not far from Aspen. He’s up the valley from Aspen, near as I could understand, but I didn’t double-check his off-the-cuff description of his stomping grounds and thus can’t tell you for sure where he’s from.

What I did glean: His home valley is in the midst of a massively inconvenient bridge-reconstruction project that’s effectively shut down his only direct escape route. He’s doing his best to be away from home the entire time, about three months. (“Ninety-five days,” he says, not that he’s counting.)

So far, so good. After RAGBRAI, he’s heading north and west, into the Dakotas and up the Prairie Provinces. He’s always wanted to drive across Saskatchewan, he says, and he’ll get his wish soon enough. Then an indeterminate layover in Banff, down to Waterton Lakes and Glacier, and on to Yellowstone and the rugged wastes of central Wyoming.

“It is,” the second gentleman allows. “But, these days, every day is Saturday.”

Retirement has treated the second gentleman well. He can do what he wants, when he wants, without fear of recourse. The self-described “biggest mistake I ever made,” he remarks, was an ill-advised foray into snowbirding. He arrived in Honolulu early one winter, ready to wait out the cold season in a condominium overlooking Waikiki. For reasons he didn’t really explain, he immediately regretted the decision, though it took him another six weeks to disentangle from whatever commitments he’d already made.

“I stepped off the plane and into the tropical breeze and thought, ‘Man, what have I done,'” he says. His companion laughed, knowingly, like he’d also made a terrible mistake and tried to spend the winter in Hawaii at some point.

Our family friend, a native Iowan, skipped out on Orange City. “It doesn’t have a real bar,” she said, as she promised to catch up with us in Day 1’s halfway town.

Well versed with her fondness for good wine, we assumed she knew Orange City’s bar scene well enough to know that no local establishment could live up to her standards.

We were half right. Turns out Orange City has no bar scene. The prospect of hundreds of thousands of dollars revelry revenue was enough to convince City Hall to issue the first public liquor license in goodness knows how long. This was the result: 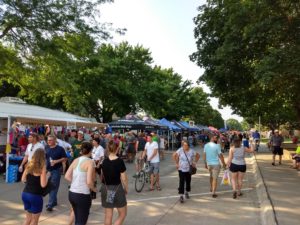 N.B. This is the tame side of town, as far as you can get from the beer garden.

Orange City doesn’t seem any more pious than any other northwest Iowa county seat, so maybe it’s just that old habits die hard. Regardless, it’s nice to see a community rally behind a once-in-two-decade opportunity to profit off humanity’s endless capacity for excess. I hoped for nothing less.