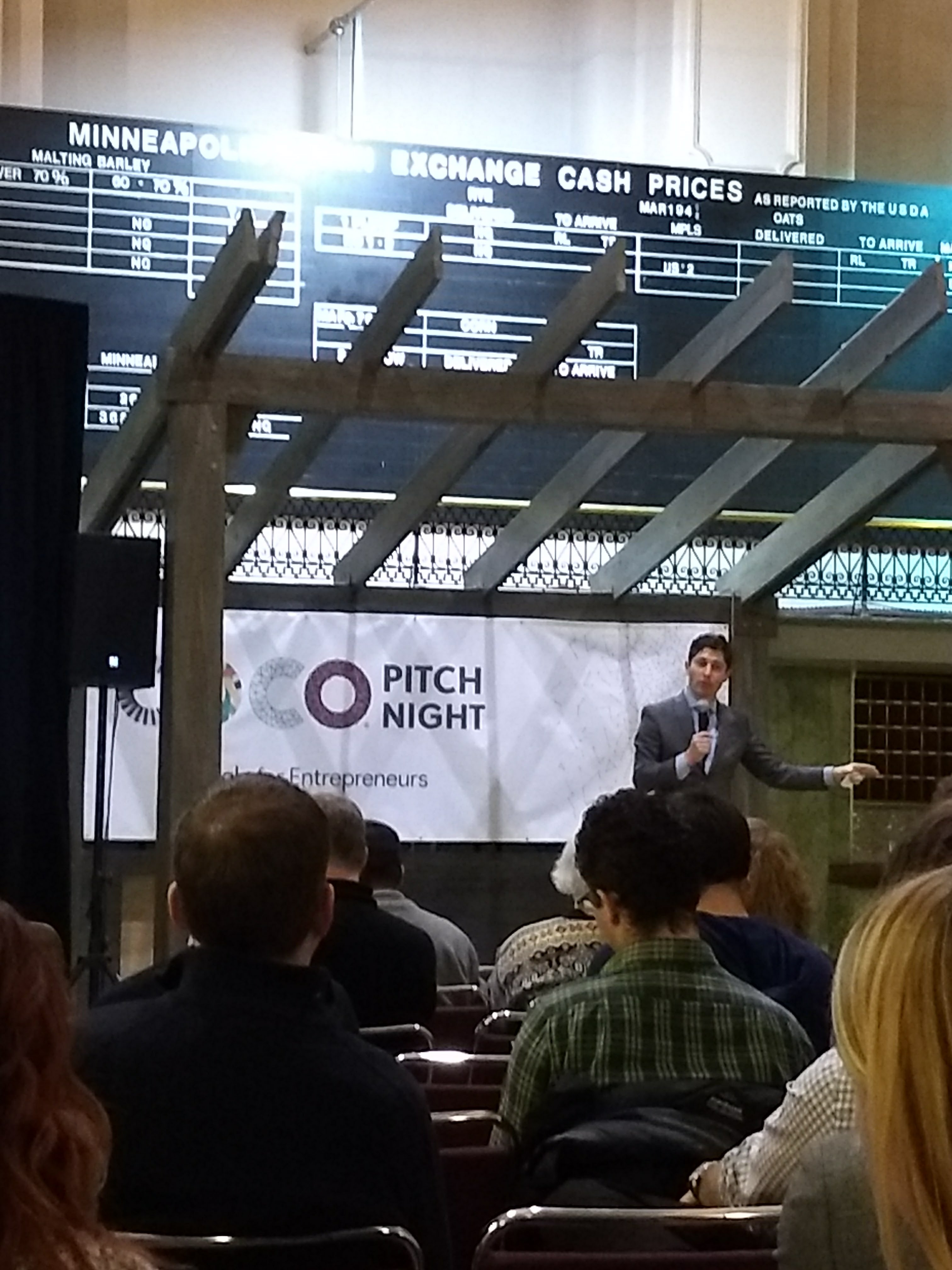 Come on, I was all the way in the back.

Five fantastic pitches, two winners, and a mayor who apparently needs to get out more.

COCO Pitch Night 2018, the fifth annual, went off without a hitch on January 23rd at the Minneapolis Grain Exchange, the coworking hub’s flagship space.

I’ve covered at least one past pitchee, but this is the first COCO Pitch Night I’ve personally been able to attend.

Two COCO Pitch Night winners – audience and judges’ favorites – earn a chance to pitch at Google for Entrepreneurs Demo Day, a March 28 confab featuring 10 to 12 startup pitches. Each of 10 GfE North America Tech Hub Network members submits two candidates to GfE, so any given startup theoretically has an even-odds shot of making the final cut, though GfE isn’t bound to select one participant from each hub..

Simply participating in GfE Demo Day is lucrative. Last year, AOL co-founder and CEO of Revolution Steve Case committed $100,000 to every participant that cleared $1M in funding within 100 days, and $200,000 guaranteed to the judges’ favorite winner. (Revolution is a big Google for Entrepreneurs booster: Anna Mason, partner in Revolution’s Rise of the Rest Seed Fund, was one of three COCO Pitch Night 2018 judges.)

Rowbot offers “robotic solutions for row crop agriculture.” Get it? It’s a robot for row crops. A row-bot, if you will.

Seriously, great name. Took me way too long to get it.

CEO (and MIT Ph.D, environmental engineering) Kent Cavender-Bares teased a $2B North American revenue opportunity for just one core application: better nitrogen management for corn. Technical and practical limitations force today’s corn farmer (“Charlie” is Cavender-Bares’s pitch persona) to make educated guesses regarding the dosage and timing of his nitrogen applications. Though he’s not yet sure how the growing season will turn out, he feels pressure to apply earlier, when his plants are just coming up. If he waits too long, the bulky applicator – which towers over his rows – is more likely to damage his rapidly growing plants.

Rowbot’s diminutive autonomous applicator can scoot between Charlie’s rows, delivering precise nitrogen doses when and where they’re needed most. Call it Agriculture as a Service (‘AaaS’ optional): Rowbot charges $55 per acre, according to Cavender-Bares, which is apparently “in line with what farmers expect.” Rowbot projects $97M revenue by 2021 – an ambitious target, one judge noted skeptically, but one apparently based on “a detailed model of our [field operation]” and how quickly the company can scale. Rowbot’s strategic partnership with Carnegie Robotics, the same shop working on Uber’s self-driving project, doesn’t hurt – and probably helped seal the judges’ favorite prize.

NightWare couldn’t be more different. CEO Grady Hannah, a 15-year Silicon Valley hand, choked up as he recounted stories of PTSD-afflicted veterans whose traumatic nightmares were finally quieted – sometimes decades after leaving service – by NightWare’s proprietary wearable. In one testimonial, an early-user Marine admitted to being “slightly ashamed to accept your help,” but grateful for a product that so dramatically improved his interactions with his wife and kids.

NightWare’s patented solution awaits FDA clearance as a Class 2 medical device. That’s the last substantial hurdle to commercialization, said Hannah. Target reimbursement is $1,000 to $2,000, and most users are expected to stick with the company for life.

Worth noting that NightWare is in seasoned hands right now thanks to Hannah and his team, but the startup has a pretty unusual provenance. Founder Tyler Skluzacek started working on the solution as a 21-year college student, back in 2015, per GoMN. His dad, a 20-year Army vet with PTSD-induced night terrors, inspired the project. Two Kickstarters and a successful exit later, Skluzacek is on to his next project: a University of Chicago Ph.D. NightWare probably won’t be the last we hear of him, though.

Three other startups showed off at COCO Pitch Night 2018: Abilitech Medical, Autonomous Tractor Company (a Rowbot sort-of-competitor with a very different vision for the future of agriculture), and Vugo. I plan to profile each here in the days ahead – stay tuned.

The joys of anonymity
I watched the mayor of Minneapolis (Jacob Frey, pictured up top) make small talk with a hungry Pitch Night attendee around the snacks table just long enough to confirm that the gentleman not pictured had no idea who he was speaking to. (Though not everyone gets to respond, “I’m the mayor,” when an interlocutor asks what brought you here tonight.)

Sure, he’d been on the job less than a month and Minneapolis has a weak-mayor system, but it was nonetheless bemusing to see the city’s chief executive gliding anonymously through an affluent gathering kitty-corner to City Hall.

I mean this in the nicest possible way: Mayor Frey, get out more!

Wouldn’t be possible without
Lastly, shoutouts to COCO Pitch Night’s two non-GfE partners are in order.

Sunrise Banks provided financial support. I honestly didn’t know much about Sunrise before Pitch Night, but company president Nichol Beckstrand did a great job selling it. Sunrise is one of 46 institutional members of the Global Alliance for Banking on Values (“we’re the most socially responsible bank around,” she said) and — shockingly, for a bank with just six physical locations — the United States’ fourth-largest gift card issuer.

Sunrise also has an “innovation department,” said Beckstrand, whose members shuttle constantly between fintech hubs on the east and west coasts. That’s despite the bank’s modest footprint and headcount – 250 employees, give or take. Looking forward to following up on that soon.